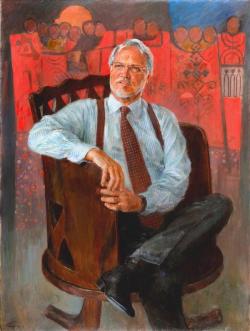 Craig Calhoun is the University Professor of Social Sciences at Arizona State University.

Previously, Calhoun was Director of the London School of Economics and Political Science (LSE), President of the Social Science Research Council (SSRC), and President of the Berggruen Institute. He was also a professor at NYU (where he founded the Institute for Public Knowledge), Columbia University, and UNC-Chapel Hill (where he founded the University Center for International Studies and served as Dean of the Graduate School). He has also been a visiting professor in Asmara, Beijing, Bristol, Khartoum, Oslo, and Paris, and an Einstein Fellow in Berlin.

A comparative and historical sociologist and social theorist, Calhoun is also engaged in anthropology, communications, economics, history, international studies, political science, philosophy, and science and technology studies. His newest book is Degenerations of Democracy, with Charles Taylor and Dilip Gaonkar (Harvard University Press 2022). He is also the editor, with Benjamin Fong, of The Green New Deal and the Future of Work (Columbia University Press, 2022) and, with a group of his former students, of the most widely used anthologies of Classicaland Contemporary Sociological Theory (Blackwell, 4th ed, 2022). He the author of nine earlier books including Neither Gods nor Emperors: Students and the Struggle for Democracy in China; Critical Social Theory: Culture, History, and the Challenge of Difference; Roots of Radicalism and Does Capitalism Have a Future? (with Immanuel Wallerstein, Randall Collins, Georgi Derluguian and Michael Mann), has edited more than twenty more, and published over 150 peer-reviewed papers, articles and chapters.

Calhoun’s current research focuses on contemporary transformations, and possible futures: for the political economy of the modern world-system, for universities and knowledge institutions, for democracy, and for shifting structures of social solidarity from local communities to nations, transnational relations, and the reorganization of regions. More philosophically, he is exploring the relationship between transformation and transcendence in understanding human existence itself.

Craig Calhoun is University Professor of Social Sciences at Arizona State University. He has worked most of his life to advance interdisciplinary social science and shape social transformations for the better.

Prior to coming to ASU, Calhoun served as Director and President of the London School of Economics and Political Science (LSE) where he remains Centennial Professor of Sociology, and President of the Berggruen Institute where he remains Senior Advisor, among other things overseeing the Berggruen Prize in Philosophy and Culture. He was previously President of the Social Science Research Council (SSRC), Dean of the Graduate School and Director of the University Center for International Studies at UNC-Chapel Hill, and founder and Director of the Institute for Public Knowledge at NYU. In addition to LSE, NYU, and UNC, he has been a professor at Columbia University and the University of Oslo and a visiting professor in Bristol, Paris, Berlin, Khartoum, Asmara, and Beijing.

Calhoun grew up mostly in Illinois, Indiana, Kentucky, and California, the son of a somewhat itinerant Protestant minister. He thinks an early need to understand different social settings shaped his vocation for social science. So did the 1960s and 70s. See (link to “My Back Pages”). He left high school early for the Resident Honors Program at USC, then did degrees at Columbia, Manchester, and Oxford Universities; studying anthropology, sociology, political philosophy, and modern social and economic history. He made his career primarily in sociology, but always within an interdisciplinary context.

As a social theorist and historical and comparative sociologist, Calhoun’s has studied democracy and social movements, the future of knowledge institutions, the shifting nature of capitalism and globalization, the future of place-based communities, the transformation of work and indeed of the human itself, and other social issues raised by new technologies, and the creativity, solidarity, and determination needed to achieve just and sustainable futures. He has done both historical and contemporary research in Britain, France, the US, China, and the Horn of Africa.

Calhoun’s newest book, Degenerations of Democracy (with Charles Taylor and Dilip Gaonkar) will be published by Harvard University Press in 2020. He is the author or co-author of 9 other books, editor of another 22, and has published more than 70 refereed journal articles and 100 book chapters that address culture, social movements, education, communication, religion, nationalism, the impact of technology, capitalism and globalization, critical theory and philosophy, and contemporary and historical empirical research. His work has been widely reprinted in anthologies and translated into 21 languages.

Calhoun has been elected a Fellow of the British Academy, the American Association for Advancement of Science, and the American Philosophical Society, a member of the Council on Foreign Relations, an Einstein Fellow by the City of Berlin and President of the International Institute of Sociology. He has received honorary doctorates from La Trobe University in Melbourne and the Erasmus University in Rotterdam, and been awarded the Sigillum Magnum of the University of Bologna.

He serves on the board of the Mastercard Foundation, one of the largest foundations in the world and dedicated to the future of Africa. He is also Chair of the Advisory Committee to Weatherhead Center for International Affairs at Harvard and Chair of the Board of the American Assembly at Columbia University. He holds honorary appointments as Centennial Professor at LSE and Professor at the College d’Études Mondiales of the Maison des Sciences de l’Homme in Paris.

At ASU, Calhoun holds concurrent appointments in the School of Politics and Global Studies, the Thunderbird School of Global Management, the Watts School of Public Affairs, the School for the Future of Innovation in Society, the School of Sustainability, and the School of Arts, Media and Engineering.